The appeal of the Syed Mushtaq Ali Trophy as one of the top cricket events in India is linked to the huge number of teams attending. It is played annually among the participants of the Ranji Trophy, which means more than 30 teams qualify for the prestigious cup. News99india.in is gladly covering all the needed elements of this cricket tournament: present teams, show their squads, explain chances, give insights and predictions, and cover the latest news related to the event and live scores.

Format of the Mushtaq Ali Trophy 2021

The format of the regarded event is a combination of the group stage with play-offs. In 2021, there will be 38 participants that are divided into six groups (six teams in each and one group with 8 contestants). All the sextets will play in the round-robin system, and only the largest group’s participants won’t meet everyone, playing only 5 games each, according to the draw.

Then, all six teams that will place at the top of each group go to the quarterfinals. To make the list of the best eight teams, additional steps should be done. Thus, the second-place teams with the best net run rate will have the chance to compete for the gold medals.

The initial plan for the Syed Mushtaq Ali Trophy 2021 was to start on October 20, as was said on the BCCI’s site on July 3rd. However, the obstacles related to corona caused many reschedules and delays. Thus, two top events, the IPL and T20 World Cup, were moved to autumn. Thus, the BCCI decided to move the start of the event to November. 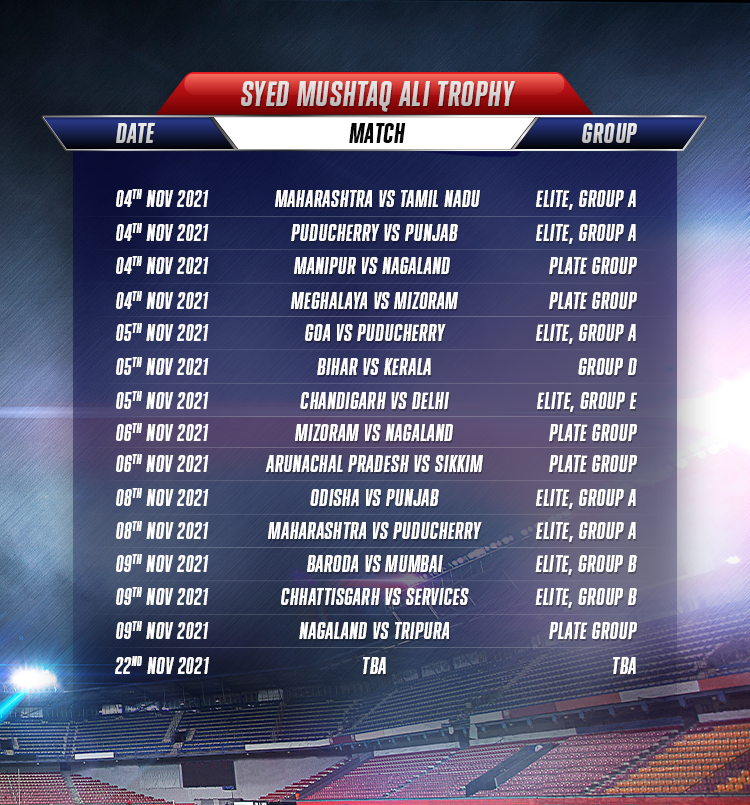 According to the renewed schedule, the Syed Mushtaq Ali Trophy should start on November 4, with all teams starting the competition on the same day. Though, there will be 19 matches. With such a tight schedule, the teams have to play all five games in the group stage and come to play-off on November 9 as the last day of the first round. Then, there will be a play-off, but the attending teams are unknown at the moment.

Read our other sports news.

The full and detailed schedule of the Syed Mushtaq Ali Trophy, with dates and participants, is shown in the table below:

The group stage of the tournament ended, so all the group tables could be finalised. Now, all the play-off participants are known. To make it easier for perception, we’ve added achievements for all the teams after the end of the group stage, which are as follows:

Of course, the preview of the groups for the Syed Mushtaq Ali Trophy should start from defining the favourites of the tournament. The last draw of the competition has finished with the victory of Tamil Nadu, which represents the Elite Group A. As they were the runners-up of the previous tournament, they can be regarded as one of the strongest teams of the last few years and will definitely claim the trophy this time.

Among the teams that require additional attention is Baroda. The representative of Elite Group B reached the final in the previous event. At the same time, they have a nice history in the Mushtaq Ali tournament, winning it two times, and taking silver medals twice.

Another historical contender for the whole competition is Karnataka. They are also representing group B, so they will definitely pretend for the play-off spot and compete with Baroda. Karnata was the only team who won two consecutive Syed Trophies in the seasons 18/19 and 19/20.

From the historical perspective, the most chances to win the Mushtaq Ali cup have representatives of the Elite Group B, which have 5 victories in total and two finals in addition. The closest historical contender is the Elite Group A, with 3 victories and six runner-up statuses. However, the tight schedule of the event will definitely bring a lot of unexpected results and the teams with better fitness will have more chances to win the trophy.

We’ve grouped them into the common table to make it comfortable to look at all the teams simultaneously. Now you can easily find your favourite team or define which of the sextets is the toughest and attracts more attention. Also, it can help bettors who are seeking the most underrated clashes or matches with the best odds. As all the participants also form the list of Ranji Trophy, a lot of fans surely know the strong sides of major favourites and can use it in betting if sure enough.

It’s not a problem to add full squads of the players or every team to this article. However, it will make it harder to read. At the same time, it’s hard to cover all the latest updates inside every squad and make comments about injuries or other issues.

So, we recommend checking the squads of every team on their official websites. That is the most reliable way to know the updates that can be important when making predictions and wagers. However, we’ll try to cover the most important changes, like the news about each team captain or top bowler/batter.

Starting from November 4, there will be 19 matches for the next five days. We are now working to bring the live score hud to our website. However, it’s hard to predict if we can cover all the live scores of Syed Mushtaq Ali Trophy matches.

In this regard, you can visit dedicated websites with live scores on cricket. They will surely cover Mushtaq Ali tournament results online. Nonetheless, we’ll try to come with all the needed information about the event and focus on the Syed Trophy in the cricket section.

The considered competition was named after the famous Indian cricket player – Syed Mushtaq Ali. He was born in 1914 and became one of the most prominent players in the Indian history of cricket. He was part of the national team from 1934 and played the last game for India in 1952.

Interestingly, both the opening and final games were against the England cricket squad. Not surprisingly, this opponent became special for Mushtaq Ali. Thus, he was the first Indian cricketer to score more than a century runs during an overseas Test match. It was on the famous football stadium Old Trafford in Manchester in 1936.

Among the most notable characteristics of Syed Mushtaq Ali were his batting power. His strong right hand was often a nice option to start the match, so he was an opening batsman. At the same time, he was a left-hand bowler with a classic manner of throwing the ball. Not so successful in bowling, he, however, deserved the status of the all-rounder, especially during the test matches. 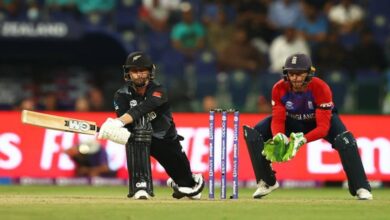 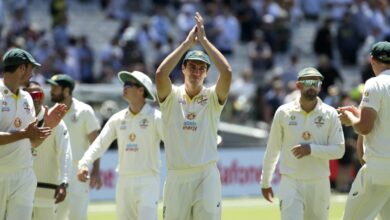 Australia destroyed England in the third Test and retained the Ashes